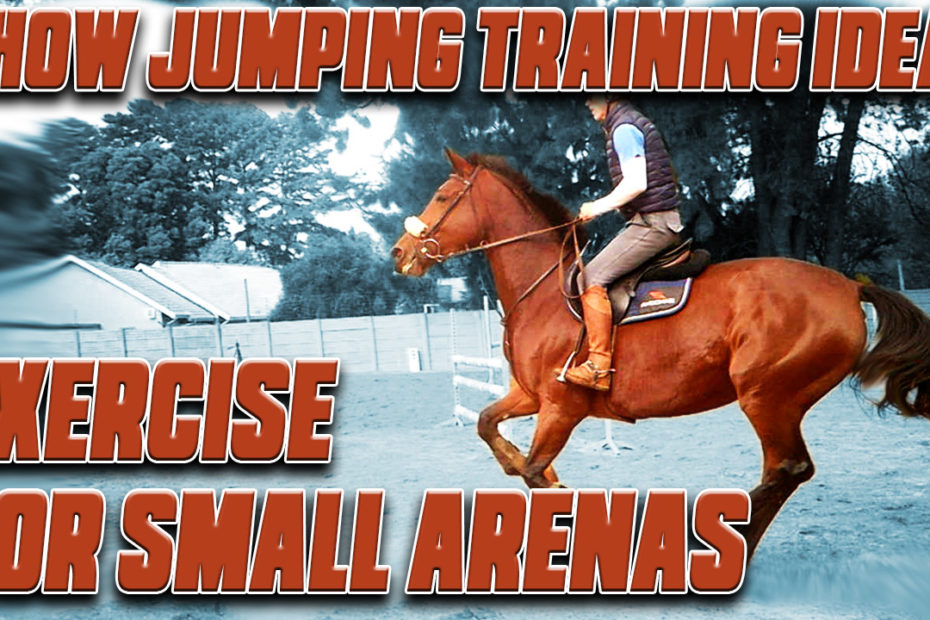 Ok, so you guys really liked the previous show jumping exercises for small arenas. So that’s why I decided to do another one. This was done in the usual arena, which obviously isn’t exceptionally small. However, this exercise will fit comfortably into a dressage-size arena. I’ve packed loads of cool stuff into it, so it’s pretty useful as well.

The exercise starts off with a gymnastic line. The first part of the gymnastic has three verticals one short stride apart. There is a placing pole exactly in the middle of the one stride. The placing pole will help regulate your horse’s stride. It will also get your horse using his body and jumping in a nice round shape over them. Then it’s three strides to an oxer.

How to set this Show jumping exercises for small arenas up

Ok so it’s a nice simple setup, but you’re obviously keen to find out all the measurements, so I won’t keep you waiting.
Jump 1
Firstly, you set this line up down this long side of your arena. Start with the three verticals with the placing poles placed exactly in the middle of jumps. This part of the line will get your horse jumping really carefully over the verticals and the placing poles will get your horse jumping through his back and give you a nice round shape over the jump.
These are the measurements. It’s 7 paces between the first two verticals and then 7.5 paces between the second and third vertical. The distances for the placing poles are 3.5 paces for the first placing pole. And then 3.75 of a pace on either side of the second placing pole. Finally it’s 16 paces to the oxer for 3 strides.
Jump 5, 6 and 7
Then down the other long side of the arena, you set up this line. It’s a vertical to an oxer to another vertical. From the first vertical to the oxer is 16 paces so it rides 3 strides. Then from the oxer to the second vertical, it walks 20 paces, so it rides 4 strides. So it’s 3 strides to 4 strides.
Jumps 3 and 4
And finally, between the two lines you just set up, you set up this line. A vertical 5 strides on a curve to a one stride double combination. So from the vertical to the first part of the double walks 24 paces for the 5 strides. And then it’s 8 paces from the oxer to the vertical for the 1 stride in the double.

Some of our latest exercises:

So that’s our showjumping training tips for this week. You are also most welcome to join our Facebook group. We are a group of like-minded showjumpers from around the world. We all want to become the best showjumpers we can be. You can post videos and get feedback from the other riders, including myself. JOIN OUR FACEBOOK GROUP

Find out more about our showjumping training videos